Cyndi McKenna, from Yelm, describes herself as a long-time seeker. She has owned a spiritual bookshop and managed a spiritual center with her husband. Her spiritual journey was well underway before she discovered Svaroopa® yoga and meditation. She had many experiences along the way, but “it wasn’t complete,” she said. “We weren’t given the teachings or philosophy that explained the experiences. I felt a bit lost and in a rut. Where could I get authentic guidance?”

Researching about selling a water purifier to the yoga market, she bought her first ever copy of Yoga Journal in March 2016. In it the Svaroopa® Vidya Ashram ad caught her eye. She went to the website, did extensive research and found a Svaroopa® yoga YouTube video. Gathering up blankets and firm couch cushions, she went through the poses, pausing the video for alignments. Cyndi was surprised to be led inward to “the Presence,” a deep peace and calmness that she had experienced before. She thought, “Wow, yoga poses can put me in that state too?”

She wanted more. Since there weren’t any teachers nearby, she bought the Primary Practice DVD, started practicing and bought Swamiji’s first book, Yoga in Every Moment. On the website, Cyndi went through all the Freebies, especially enjoying the Shiva Sutra Talks and satsang audios. After 10 months of studying the Svaroopa® Sciences, she felt great respect for Swami Nirmalananda and applied to be a Shishya.

Only days before Swami Nirmalananda was offering satsangs in Boise, Cyndi received approval as a Shishya member. She participated in the Thursday Shishya Guru Gita conference call. Then she drove 540 miles to attend the Guru Gita, satsang and brunch with Swamiji in Boise. A few days after returning home, she had an amazing realization. “I came out of depression and only then realized I had been depressed. It was like night and day,” said Cyndi. “I also knew that chanting the Guru Gita with Swamiji and immersing in her recorded satsangs were instrumental in lifting the depression.”

She kept looking at Foundations courses on the Calendar. Even though finances were tight, a scholarship and a cancellation helped her attend the June 2017 Foundations at Lokananda. She discovered the importance of the “embodiment of your more conscious awakened state.” She realized, “Svaroopa® yoga is the yoga for spiritual people, for people who want to embody and ground their spirituality.”

Cyndi’s other spiritual experiences happened without a solid framework or explanations. Cyndi says, “The Svaroopa® Sciences give me the pathway to move forward. The framework of Kashmiri Shaivism and Swami Nirmalananda’s teachings explain the experiences my husband and I have had.”

Having traveled to India, Cyndi knows what it’s like to be in the presence of Great Beings. She clearly tapped into a powerful stream of Grace through the on-line Freebies, and meeting Swami Nirmalananda affected her deeply. Cyndi says, “I felt the import, the significance, the honor of being in the presence of a realized master. I felt humbled.”

At Foundations after the Sunday satsang, she waited in the darshan line, watching someone ahead of her do a full pranam at Swamiji’s feet. “I just started crying,” shares Cyndi. “I felt self-conscious. But when I got there, I just couldn’t NOT do it.” She had a “simple and insightful” exchange with Swamiji about the tears. Cyndi told Swamiji that she has been a “spiritual chameleon” and was afraid to commit to a single path. Swami Nirmalananda said no one was asking for a commitment. Then Swamiji asked gently, “Then the fear is greater than God?” 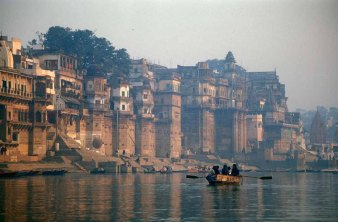 Cyndi is in the river, diving deep into the Grace-filled current of the Svaroopa® Sciences. She has an embodied, time-tested way to dive into her Divine Essence, her Own Self, the One Self being All. What’s next? Cyndi wants to become a Svaroopa® Vidya Meditation Teacher and Certified Basics Svaroopa® Yoga Teacher. She looks forward to hosting Foundations to help facilitate spiritual access for people in her area.